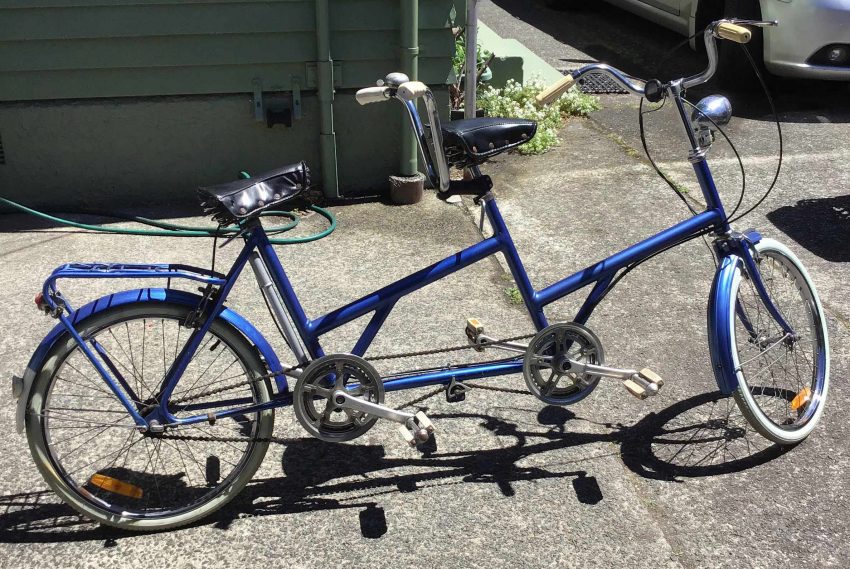 The Raleigh 20 was the archetypal British city bike of the 1970s and Raleigh’s biggest selling product line in the middle of that decade. The company made up to 140,000 a year and the bike was in production from the late 1960s to the early 1980s. You can read more about it here: https://hadland.wordpress.com/2012/06/24/raleigh-twenty-r20/

Recently I acquired a 1974 Raleigh 20 FE (‘Fully Equipped’) that had been in the same ownership for 40 years and was in almost completely original condition, apart from modest wear and tear. It is a testament to the fitness for purpose of the product that the owner kept it and used it for so long. Here is a photo tour of the bike in question. 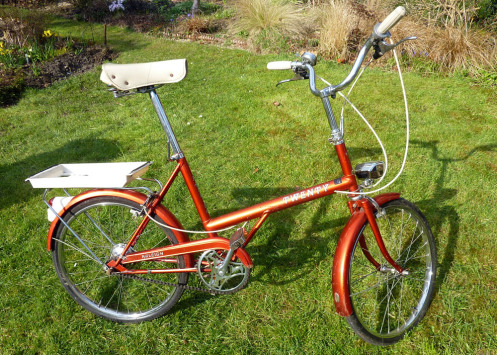 A front view. Originally the bike would have had a plastic clip to hold the three cables together in front of the head tube more neatly but these clips tended to fall off and were not really necessary. The headlamp shown here is a replacement but differs only slightly from the original, which still worked, despite having a missing ‘glass’. All Raleigh 20s had a restrictor to stop the bike being ridden with the forks reversed. In models fitted with integral lighting, the stop was combined with the headlamp bracket. 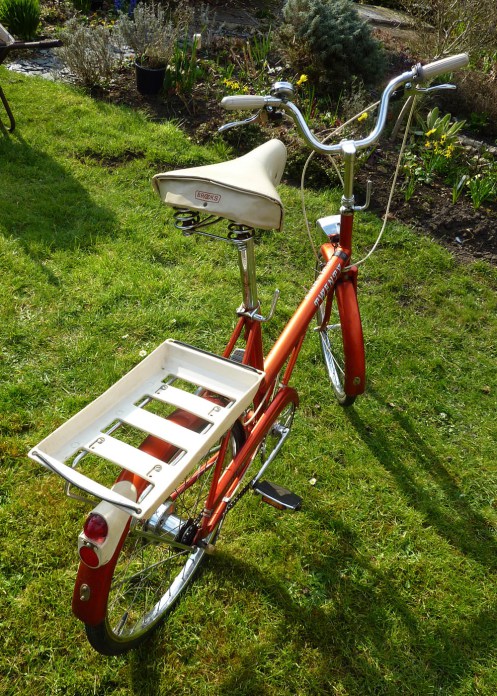 Rear carriers (racks) varied between Raleigh 20 models. Some had none and others had a Pletscher alloy carrier with sprung parcel clips. The FE had a steel carrier with a plastic tray. This helped hold the removable holdall (shopping bag) that came with the bike. It’s rare to see the original holdall and this bike had lost its one. At the front and back of the tray you can see the elasticated cords that held the holdall in the tray. The rear lamp is combined with the rear reflector in the neat and very robust unit fitted to the rear mudguard. 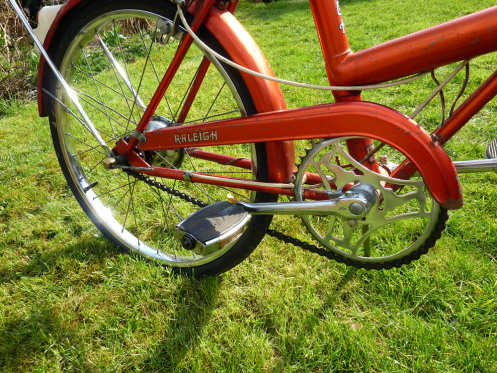 The chain stays were flattened to wrap around the underside of the wide (78mm) Raleigh-threaded bottom bracket, to which they were brazed. The stays then carried on forward and were brazed to underside of the main beam. The result was a very stiff frame. Note the Raleigh heron’s head motif stamped into the steel chainwheel. The pedals were Raleigh’s own low maintenance type, which used non-adjustable, solid, sintered metal, oil-retaining bearings instead of cones and ball bearings. The end caps often fell off, as can be seen here. The hub is a Sturmey-Archer Dyno-Three AG3, combining a 3-speed wide-ratio hub gear and a Dynohub alternator to power the built-in lighting. 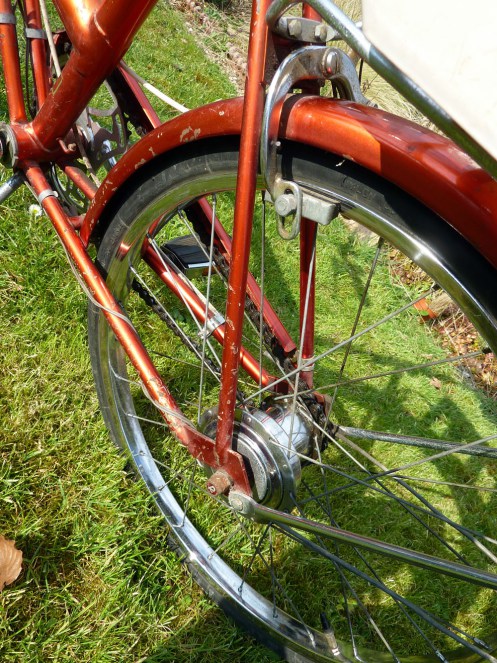 The rear hub seen from the left-hand side of the bike. The wider section of the hub houses the alternator. The hub gear was operated by a twist-grip on the handlebar. This had a friction clutch within it to automatically take up slack that might develop in the gear control cable. There are instructions for re-setting this function in the ‘Gears’ this website. 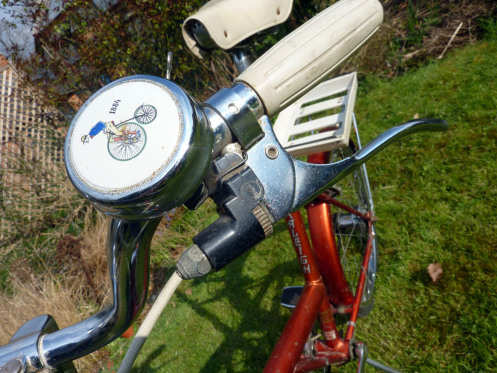 This bike is fitted with Raleigh’s Design Centre Award-winning self-adjusting brake levers. In common with many old-style automotive drum brakes, these detected increased brake lever travel and, via a ratchet mechanism, automatically tightened the cabled to compensate. Sadly, this was all too complicated for many bicycle mechanics and the levers were soon dropped. 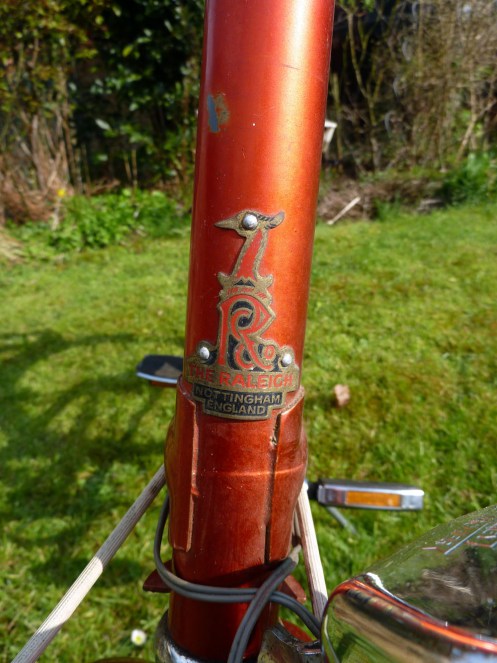 A proper metal heron’s head Raleigh head badge, riveted on by hand. None of your cheap self-adhesive stickers in those days! 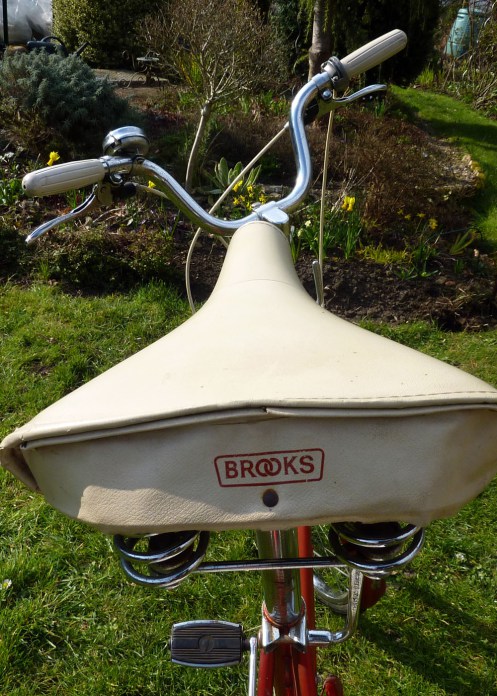 The type of saddle fitted to Raleigh 20s varied somewhat but was always a vinyl-covered sprung mattress type. A cheap version, sold under another Raleigh-owned brand name such as BSA, might well have a very basic, unbranded saddle, with no main springs. This FE, however, is a high-end model and therefore has a Brooks fully-sprung mattress saddle. 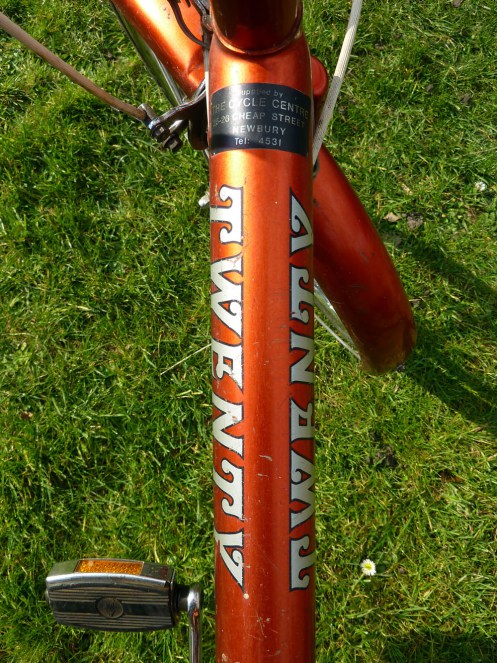 A view down onto the top of the main beam. As the label shows, the bike was sold in Newbury in the days when that town had 4-digit phone numbers. Some time later, in an office over a shop in Newbury, a company called Vodafone started life. Now most phone numbers are so long we can’t remember them! 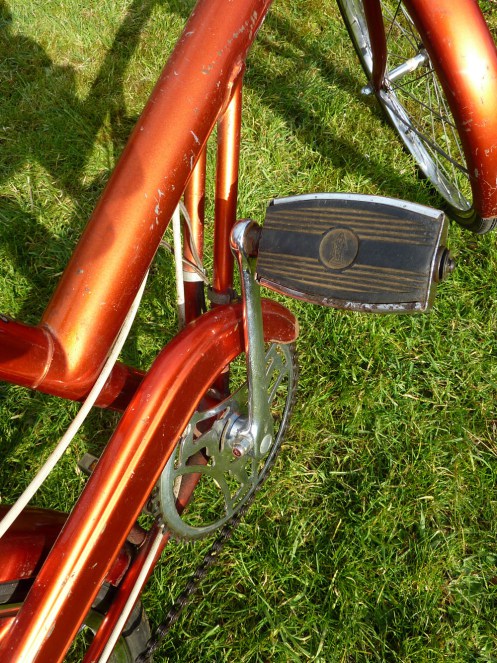 This view shows, among other things, the twin bracing struts formed by extending the chain stays around the bottom bracket and up to the main beam. You can also see the Raleigh pedal, complete with the Sir Walter Raleigh logo moulded into the heavy solid rubber body – and the typically missing end cap! 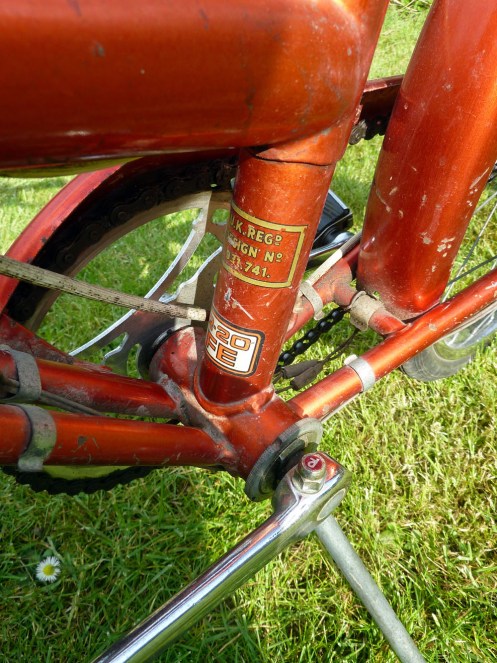 The final picture shows the bottom bracket area from the left-hand side. The fixing for the very robust and reliable propstand is brazed to the underside of the bottom bracket. A nice touch on the Raleigh-branded 20s (as distinct from the versions sold under other Raleigh-owned brand names) is the cotter pin nuts bearing the Raleigh monogram.